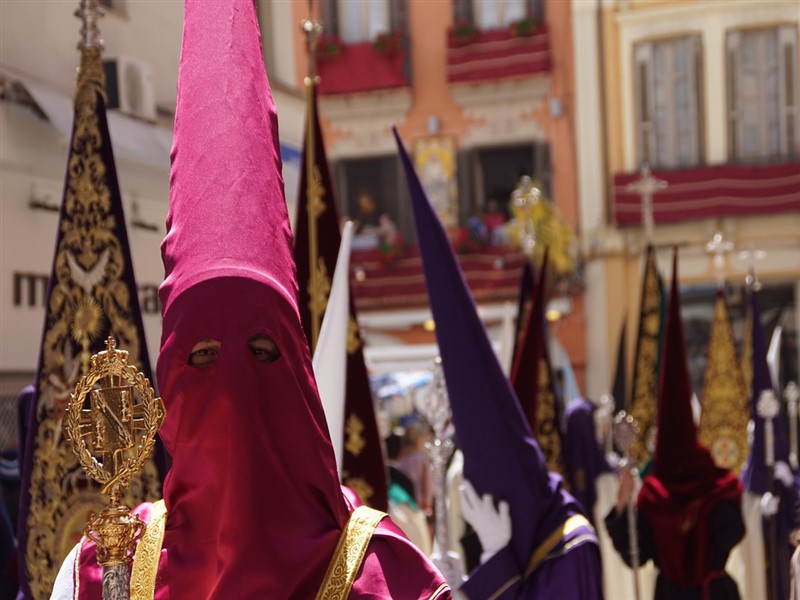 Festivals in Spain are lavish and colorful and although a religious festival, the Semana Santa is perhaps Spain’s most vibrant. Every day from Palm Sunday to Easter Sunday, elaborate processions featuring massive pasos carrying statues of Christ or the Virgin Mary carried by penitents, accompanied by the music of coronets and drums, can be seen parading the streets of almost every Spanish town in an annual tribute celebrating the Passion of Christ,

A one-of-a-kind display of tradition, music, culture, theatre and religion, the processions of Semana Santa are organized by hermandades or cofradías (religious brotherhoods, some of which include women) of which members can be seen during the parade dressed in white robes and pointed conical hoods adding a sinister air to the festivities. However, solemnity isn’t the keynote of the festival as there is a delightful amount of carousing and frivolity and bars are full day and night with families participating until the wee hours of the morning.

Throughout the assigned week, processions leave the respective churches from early afternoon onwards, parading through the city and to the cathedral and back to the churches many hours later. The climax however is on Good Friday morning when the processions leave the churches at midnight to wander through the town for most of the night, arriving at the cathedral in the early hours of the morning. The participants are usually dressed to the nines, with women in blowsy frocks and men rocking full suits despite the sun and it is considered disrespectful for tourists to be seen in shorts and t-shirts.

The origins of the festival date back to 1521 when the Marqués de Tarifa who had visited the Holy Land returns to Spain. It was after this visit that it becomes known that he has institutionalized the Via Crucis (Stations of the Cross) in Spain and it is believed that it is this occasion that has come to be celebrated with processions overtime. Over time, this observance of the Via Crucis evolved into various scenes of the Passion, with portable crosses and altars incorporated into the mix. This would eventually lead to the elaborate processions that we see today. (Enforex.com, n.d.)

Semana Santa in Andalucía, which is the most extravagant region for Semana Santa, starts on the Sunday before Easter and lasts until Easter Sunday itself. One may even witness the performance of saetas in Andalucía which are flamenco performances sung from balconies in the narrow streets of the city. While these melodic performances were once the spontaneous outbursts of worshippers overcome with emotion, the saetas you see nowadays are preplanned, making the event more dramatic. The procession usually stops to listen until the song is finished and moves on afterwards.

If you are planning to visit Spain during the festival, we would like to advise you to book your accommodation and travel well beforehand because specially places like Malaga in Andalucía tends to get booked months in advance. (Andalucia.com, n.d.)